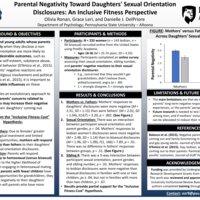 Adolescents and young adults who disclose a non-heterosexual orientation (“come out”) to their parents often are met with a variety of negative responses, including denial, anger, and concern (D’augelli, Grossman, & Starks, 2008; Willoughby, Malik, & Lindahl, 2006). Research reliably finds that individuals whose parents react more negatively to these disclosures are more likely to experience adverse mental and behavioral health outcomes, including depression, substance abuse, low self-esteem, and sexual risk taking (Baiocco et al., 2015, 2016; Willoughby et al., 2006). Due to the potential costs associated with these experiences for sexual minority youth, it is important to understand the factors that lead some parents to respond more negatively when their child discloses a lesbian, gay, or bisexual identity.

Growing empirical literature has revealed reliable associations between negative parental reactions to youths’ disclosures and persistent family conflict, traditional political and religious views, and low levels of parental education (Baiocco et al., 2016; Willoughby et al., 2006). However, almost no research has viewed parents’ negative emotional responses to these disclosures through an evolutionary lens. (For a notable exception, see Wisniewski, Robinson, & Deluty, 2010.) The current work will build on the extant literature by testing evolutionarily-informed predictions regarding parental negativity to daughters’ coming out. We will test the hypothesis that parents’ negative responses to their daughter’s sexual orientation disclosures are influenced by parents’ concerns related to their own inclusive fitness. Specifically, the greater the parent’s perceived fitness costs, the more negatively they will respond to such disclosures.