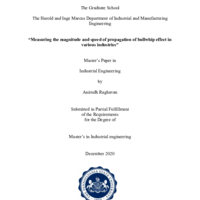 The amplification of demand variation in a supply chain is known as the Bullwhip Effect. This effect creates high inefficiencies due to high variation in the order quantities placed between companies, leading to a large swing in the amount of material flow, thus increasing stock and generating stock-outs. The objective of this study is to measure the strength of bullwhip effect in the industry-level US data under shock behavior. We say that an industry exhibits bullwhip effect when the variability of the inflow (production) to the industry is greater than the variability of the outflow (demand) from the industry. For our study, we will use the data obtained from the U.S. Census Bureau and Bureau of Economic Analysis (BEA), and Bureau of Labor Statistics. This data reports monthly sales and inventories for retail, wholesale and manufacturing industries. We sort the data using the North American Industrial Classification System (NAICS). We can say that an industry experiences bullwhip effect when the variance of production is greater than the variance of its demand i.e. the Amplification ratio is greater than 1 or the difference is positive. We also study the supply chain dynamics caused by demand shock during COVID-19. An inter industry comparison is carried out to check how fast or how slow each industry recovered from demand shock by comparing the evolution of amplification ratio over time for each industry after the demand shock. The differences for the amplification ratio and its the temporal evolution in each industry is graphically visualized.