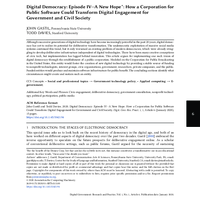 <jats:p>Although successive generations of digital technology have become increasingly powerful in the past 20 years, digital democracy has yet to realize its potential for deliberative transformation. The undemocratic exploitation of massive social media systems continued this trend, but it only worsened an existing problem of modern democracies, which were already struggling to develop deliberative infrastructure independent of digital technologies. There have been many creative conceptions of civic tech, but implementation has lagged behind innovation. This article argues for implementing one such vision of digital democracy through the establishment of a public corporation. Modeled on the Corporation for Public Broadcasting in the United States, this entity would foster the creation of new digital technology by providing a stable source of funding to nonprofit technologists, interest groups, civic organizations, government, researchers, private companies, and the public. Funded entities would produce and maintain software infrastructure for public benefit. The concluding sections identify what circumstances might create and sustain such an entity./jats:p