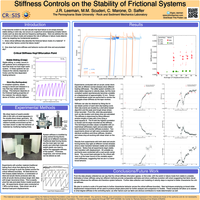 Frictional sliding systems may respond to perturbations via linearly stable (stable sliding) or unstable (stick-slip) modes of behavior. The transition between these states is often modeled in the rate-and-state frictional (RSF) framework as a Hopf bifurcation occurring at a critical stiffness kc. Here we examine the frictional behavior of a granular system in which we are able to modify the effective system stiffness and observe the transition from stable sliding to stick-slip failure. The observed response is more complicated than a simple Hopf bifurcation, indicating two-state variable friction behavior and interactions between the loading system and constitutive response that are not accounted for in typical RSF 1-D elastic systems.

We performed tests on sheared layers of Min-U-Sil quartz power with a mean grain size of 10 Âľm in a double-direct-shear geometry. The effective stiffness of the system was modified by changing the normal stress applied to the sample or by using forcing blocks of different compliance in the sample configuration. Samples were sheared at a constant load point velocity of 10 Âľm/s for all experiments. During the experiments the shear stress was removed and re-applied several times to measure the system stiffness at a given displacement.

The demarcation of stable and unstable behavior by kc appears to be a good first order approximation, as we generally observe slow stick-slip at stiffnesses at or below kc, and stable sliding at stiffnesses above kc. Additionally, we document a second order effect of fabric development on gouge layer stiffness that plays a role in modulating frictional behavior. Even in experiments that produce stick-slip failure, there is some strain required before unstable behavior occurs.

Our observations suggest that the strain history and shear fabric development of the system is an important factor determining frictional stability. These results suggest that failure modes of tectonic fault zones may evolve with accumulated slip, localization of stiffness heterogeneities, and evolution of frictional parameters.