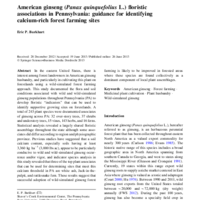 In the eastern United States, there is interest among forest landowners in American ginseng husbandry, and particularly in cultivating this plant on forestlands using a wild-simulated forest farming approach. This study documented the flora and soil conditions associated with wild and wild-simulated ginseng populations throughout Pennsylvania (PA) to develop floristic "indicators" that can be used to identify supportive growing sites on forestlands. A total of 243 plant species were documented associates of ginseng across PA: 32 over-story trees, 37 shrubs and understory trees, 15 vines, 143 herbs, and 16 ferns. Statistical analysis revealed a largely shared floristic assemblage throughout the state although some associates did differ according to region and physiographic province. Previous studies have suggested that a soil calcium content, especially soils having at least 3,360 kg ha-1 (3,000 lbs ac), appear to be particularly conducive to wild and wild-simulated ginseng occurrence and/or vigor, and indicator species analysis in this study revealed that three of the top plant associates that can be used for determining sites that meet this calcium threshold in PA are white ash, Jack-in-the-pulpit, and rattlesnake fern. These results suggest that successful adoption of wild-simulated ginseng forest farming is likely to be improved in forested areas where these species are found collectively as a dominant component of local plant assemblages. © 2013 Springer Science+Business Media Dordrecht.