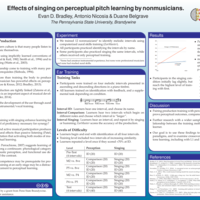 Effects of singing on perceptual pitch learning by nonmusicians.

Effects of singing on perceptual pitch learning by nonmusicians Music perception and production are tightly linked[1] and their interaction is an important aspect of musical development[2]. Aural skills training for musicians often pairs perception (dictation) with production (sight-singing). We investigated whether this link is effective for musical novices: Does pairing perceptual training with singing enhance learning, or is a certain level of perceptual/productive proficiency necessary for synergy? Participants (nonmusicians who didn't speak a tone language) underwent one hour of ear training using commercial software (EarMaster). Training focused on identification of four melodic intervals (major second, fourth, fifth, octave). Participants were introduced to the concept of intervals and heard examples of each. Training consisted of brief ID tasks including two intervals, increasing in difficulty (e.g., second vs. octave, fourth vs. fifth). Participants heard an interval and chose from two labels, receiving feedback and the opportunity to relisten. A level was repeated once if participants scored below 80%. The first and last tasks of the session served as pre- and post-tests, which included all four intervals. Interspersed with ID tasks was one of two supplemental tasks. Half of participants (perception-only condition) heard two intervals (beginning on different notes) and decided which was larger. The others (perception+production condition) heard an interval and repeated it by singing or humming; responses were recorded by a microphone, and pitch track and accuracy score were displayed. Preliminary findings (n=8, 20 expected) indicate that participants who received singing training improved more in identification (37%, vs. 11% for perception-only training). Thus, it appears that coupling production with perceptual training is effective even at the early stages of musical training. Additional data will be presented from tone-langauge subjects, who show similar improvement in each condition, likely because they can already utilise vocal pitch production in perception tasks. References [1] Zatorre, R. J., Chen, J. L., & Penhune, V. B. (2007). When the brain plays music: auditory–motor interactions in music perception and production. Nature Reviews Neuroscience, 8(7), 547-558. [2] Novembre, G., & Keller, P. E. (2014). A conceptual review on action-perception coupling in the musicians’ brain: what is it good for?. Frontiers in human neuroscience, 8, 603.