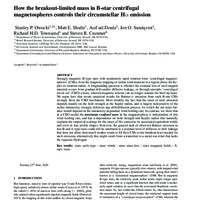 Strongly magnetic B-type stars with moderately rapid rotation form ‘centrifugal magnetospheres’ (CMs) from the magnetic trapping of stellar wind material in a region above the Kepler co-rotation radius. A long-standing question is whether the eventual loss of such trapped material occurs from gradual drift and/or diffusive leakage, or through sporadic ‘centrifugal breakout’ (CBO) events, wherein magnetic tension can no longer contain the built-up mass. We argue here that recent empirical results for Balmer-α emission from such B-star CMs strongly favour the CBO mechanism. Most notably, the fact that the onset of such emission depends mainly on the field strength at the Kepler radius, and is largely independent of the stellar luminosity, strongly disfavours any drift/diffusion process, for which the net mass balance would depend on the luminosity-dependent wind feeding rate. In contrast, we show that in a CBO model, the maximum confined mass in the magnetosphere is independent of this wind feeding rate and has a dependence on field strength and Kepler radius that naturally explains the empirical scalings for the onset of H α emission, its associated equivalent width, and even its line profile shapes. However, the general lack of observed Balmer emission in late-B and A-type stars could still be attributed to a residual level of diffusive or drift leakage that does not allow their much weaker winds to fill their CMs to the breakout level needed for such emission; alternatively, this might result from a transition to a metal–ion wind that lacks the requisite hydrogen.

This is a pre-copyedited, author-produced PDF of an article accepted for publication in 'Monthly Notices of the Royal Astronomical Society' following peer review. The version of record [Owocki, S.P., Shultz, M.E., ud-Doula, A., Sundqvist, J.O., Townsend, R.H.D., and Cranmer, S.R. (2020). How the breakout-limited mass in B-star centrifugal magnetospheres controls their circumstellar H α emission. Monthly Notices of the Royal Astronomical Society 499, 5366–5378.] is available online at: https://doi.org/10.1093/mnras/staa2325.