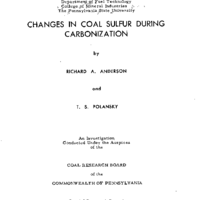 CHANGES IN COAL SULFUR DURING CARBONIZATION

Special Research Report SR-19 The carbonization behavior of sulfur in the coal and its float fraction studied is summarized by the following observatiqns. (1) Pyrite decomposed initially around 350°; decomposition was most extensive between 550° and 650°, and was essentially completed at 700°C, Pyrite decomposition was markedly affected by secondary reactions with volatile matter. (2) Sulfate, present in small quantities in the parent coals, was not found in the cokes prepared above 650°C. (3) Sulfide formation incr~ased with temperature. The amount of sulfide found below 700°C did not correspond with that predicted for reactions in which one mole of ferrous sulfide is formed for each mole of pyrite decomposed. Above 750° the atomic ratio of sulfide sulfur to non-pyritic iron was greater than unity, indicating the existence of other inorganic sulfides, such as calcium and magnesium sulfides, and/or a complex iron sulfide. (4) Iron, uncombined with sulfur and resulting from pyrite decomposition, was found in cokes from the whole coal produced at temperatures between 350° and 650°C. The nature of the data does not permit conclusions as to its existence above 650°C in these cokes. The 770°C coke of the float coal contained sulfurfree iron, (5) The organic sulfur content d~creased during carbonization. About 153 of the original organic sulfur was decomposed and evolved at 366°C. At 650° approximately 50 to 603 of the sulfur in the cokes of the whole coal was in organic form, compared to 36.43 in the coal. Above 650° the percent organic sulfur decreased, being about 113 of the total coke sulfur at 885°C. (6) Elemental sulfur was not detected in cokes prepared below 750°C from the whole coal. Above thQS temperature small quantities of free sulfur were observed qualitatively; the amount apparently increased with temperature. It was not detected in the cokes produced from the float fraction of the whole coal. The investigation of the use of benzoin in conjtlnction with a colorimetric sulfate procedure for the quantitative determination of elemental sulfur was inconclusive.