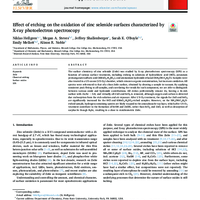 The surface chemistry of zinc selenide (ZnSe) was studied by x-ray photoelectron spectroscopy (XPS) as a function of various surface treatments, including etching in solutions of hydrochloric acid (HCl), potassium permanganate:sulfuric acid (KMnO4:H2SO4), and ammonium hydroxide:ethanol (NH4OH:C2H6O). Samples were also treated in a UV-ozone (UV-O3) chamber, which removes organic contamination, but increases oxidation. All spectra were referenced to that of a clean ZnSe surface, obtained by cleaving a sample in vacuum. By applying consistent peak fitting to all samples, and correlating the trends for each component, we are able to distinguish between various oxide and hydroxide contributions. All etches preferentially remove Zn, leaving a Se-rich surface with Zn/Se ~0.8, and virtually all ZnO and SeO2 is removed, although oxygen and carbon is detected due reabsorption from the etch solution and air exposure. After UV-O3-treatment, the signals for ZnO and SeO2 are significantly increased for the HCl and KMnO4:H2SO4-etched samples. However, on the NH4OH:C2H6O-etched sample, hydrogen-containing species are likely trapped in the amorphous Se top layer, which after UV-O3 treatment contribute to the formation of SeOH and ZnOH, rather than SeO2 and ZnO, as well as desorption of surplus Se though H2Se, resulting in a close to stoichiometric ZnSe.