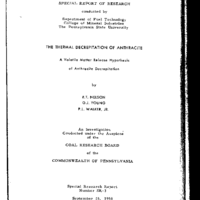 Special Research Report SR-3 Despite the fact that the Pennsylvania anthracite fields are located near major steel-producing areas, the role of anthracite as a metallur- ·•· gical fuel has fallen to that of a minor blending component in the production of metallurgical coke. Attempts to use raw anthracite for modern blast-furnace and cupola operations have repeatedly shown that it is less satisfactory than coke. Although suitable in all other respects for use in present-day metallurgical processes, anthracite is restricted by the following two unfavourable characteristics: I. The physical strength of the raw anthracite, as indicated by the A. S. T. M. Tumbler and Drop-shatter tests for coke (1, 2), is inferior to that of metallurgical coke. 2. The tendency of anthr.acite to decrepitate when subjected to appreciable temperature gradients. These two characteristics give rise to excessive pressure drop during cupola and blast-furnace operation with ultimate pressure drop increases beyond blower capacity. This leads to irregular descent of the furnace charge, pressure fluctuations, and partly frozen stock columns. These difficulties are due, in part, to improvements in furnace design during the present century which have led to increased heating rates and, hence, to increased thermal shock. However, the fact that in 1955 over 3, 000, 000 tons of metallurgical coke were used at a cost of nearly $80, 000, 000. 00 clearly indicates the desirability of employing anthracite once more as a competitive metallurgical fuel. Of the two objectionable features of anthracite mentioned above, thermal decrepitation appears to be the more serious. Neither of the two physical strength tests appear to bear any relationship to the reaction of the fuel in either blast-furnace or cupola operation except with respect to handling and load carrying ability. With regard to -2- handling, the difficulty is not due to the characteristics of the anthracite so much as to a general refusal on the part of the steel industry to recognize that it is a different material and sho~ld, therefore, be"handled by different transport equipment. Although it appears possible that the load carrying problem can be overcome by the use of shorter stock columns, it is probable. that this characteristic is more closely related to thermal decrepitation than to physical strength alone. Thus, if methods could be developed to reduce thermal decrepitation, anthracite would be much more widely used as a metallurgical fuel. With this object in mind, experimental work was commenced in the Fuel Technology Department of Pennsylvania State University in 1953 to investigate the possibility of improving the strength of anthracite by a heat treatment process which would increase its thermal stability. This work has led to the view that the release of volatile matter during the primary thermal decomposition of anthracite is the most important controlling factor with regard to decrepitation and that a relationship should exist between the average particle size and the critical heating rate. As a result of these conclusions, several attempts have been made to heat-treat anthracite in such a way that the rate of release of volatile matter does not lead to an internal pressure in excess of that required to overcome the physical strength of the material. Although at least partial success has been reported in all cases, progress has been slow. This is probably due to the fact that all such investigations have been carried out on a large scale and, as a result, they have been costly and time consuming. Also, attempts to correlate both laboratory and pilot plant results have not proved particularly successful. This is probably due to the fact that no attempt has so far been made to deduce theoretically (or at least semi-theoretically) the most significant variables involved and the manner in which they are related mathematically.