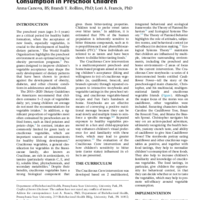 The preschool years (ages 3−5 years) are a critical period for healthy habit formation, when the acceptance of new foods, especially vegetables, is crucial to the development of healthy dietary patterns. The Cruciferous Crew intervention is a multicomponent preschool- and home-based program aimed at increasing children’s acceptance (liking and willingness to try) of cruciferous vegetables (ie, cauliflower, broccoli, and Brussels sprouts) through repeated exposures to interactive storybooks and vegetable tastings in the preschool setting, and cruciferous vegetable-based recipes and Fun Facts handouts at home. The intervention was implemented over 3 weeks with 24 children (aged 3−5 years; 58% female) enrolled in 2 classrooms at a university-based child care center in Central Pennsylvania. The preschool component consisted of the Cauliflower Power children’s book series (4 books) and weekly, brief food tastings. The first storybook in the 4-part series was sent home with participating children, along with Fun Facts handouts and recipes featuring cruciferous vegetables. Children’s liking for and willingness to taste 3 cruciferous vegetables (cauliflower, broccoli, and Brussels sprouts) were measured in brief tasting sessions (<5 minutes) by trained researchers at the baseline and post-assessment. The brief intervention was efficacious in significantly increasing children’s ability to identify cauliflower and Brussels sprouts. There was also a pre-post increase in children’s liking of cauliflower, but no increases in the liking of broccoli or Brussels sprouts. Programs designed to improve children’s vegetable acceptance may shape the early development of dietary patterns that have been shown to protect against the development of obesity, diabetes, and other chronic conditions in adolescence and adulthood.