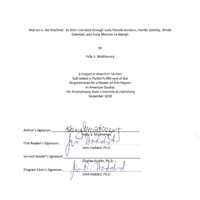 Researchers have analyzed the symbolism of man versus the machine, but less scholarship has focused on women’s interaction with technology. One such machine, in the late 19th and early 20th centuries, was the airplane. I introduce three early American female pilots who succeeded in the mastery of the flying machine. Harriet Quimby achieved the title of the first licensed, American, female pilot in 1911, and Bessie Coleman (1892-1926) followed a few years later as the first licensed, African American, female, pilot. Anne Morrow Lindbergh (1906-2001), the wife of Charles Lindbergh, demonstrated her proficiency in the field of aviation, but was led to the accomplishment by her husband. I used scholarly research of primary and secondary sources to enhance my argument that the airplane was an agent of change for Quimby, Coleman, and Morrow Lindbergh. These three women stand out in American history for their mastery of a machine, but they also advocated for causes of importance to them – namely, African American and women’s rights. I argue that the mastery of the machine and the championing of causes are connected. Without the airplane these women would not have had a platform to effect social change and advance the standing of their gender. Through the words of writers and the women, themselves, I determined that the airplane was the agent through which these three women were able to exercise a voice in society.