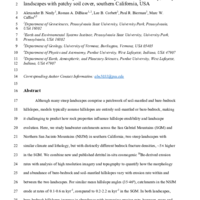 Although many steep landscapes comprise a patchwork of soil-mantled and bare-bedrock hillslopes, models typically assume hillslopes are entirely soil-mantled or bare-bedrock, making it challenging to predict how rock properties influence hillslope erodibility and landscape evolution. Here, we study headwater catchments across the San Gabriel Mountains (SGM) and Northern San Jacinto Mountains (NSJM) in southern California; two steep landscapes with similar climate and lithology, but with distinctly different bedrock fracture densities, ∼5× higher in the SGM. We combine new and published detrital in-situ cosmogenic 10Be-derived erosion rates with analysis of high resolution imagery and topography to quantify how the morphology and abundance of bare-bedrock and soil-mantled hillslopes vary with erosion rate within and between the two landscapes. For similar mean hillslope angles (35-46°), catchments in the NSJM erode at rates of 0.1-0.6 m kyr−1, compared to 0.2-2.2 m kyr−1 in the SGM. In both landscapes, bare-bedrock hillslopes increase in abundance with increasing erosion rate; however, more and steeper bedrock is exposed in the NSJM, indicating that wider bedrock fracture spacing reduces soil production efficiency and supports steeper cliffs. Additionally, higher erosion rates in the SGM require a 3× higher soil transport efficiency, reflecting an indirect control of bedrock fracture density on the size of sediment armoring hillslopes. Our data highlight how hillslope morphodynamics in steep landscapes depend on the strength of soil and bedrock and the efficiency of soil production and transport, all of which are variably sensitive to rock properties and influence the partitioning of soil and bare-bedrock on hillslopes.