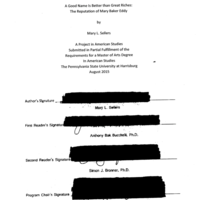 The Reputation of Mary Baker Eddy

In order to create a lasting legacy, a person must first form a reputation which can weather the vicissitudes of life. Mary Baker Eddy, the discoverer and founder of Christian Science, shaped a reputation which appealed to the religious and social climate of the nineteenth century. Through her identification as a Messiah figure, she established trustworthiness in the eyes of many who were familiar with Jesus and his miracles. Through borrowing from the other religious practices of the day, Eddy attracted those who sought faith through spiritual or scientific means. Her embracing of the role of mother not only drew her followers close to her through the image of a mother’s love and concern, it also established her religious authority as the duty of mothers during Eddy’s lifetime was to instruct their children in the faith and to preserve morality through their own lifestyles. Eddy’s adept use of marketing strategies advertised Christian Science to the world and gave it credibility. Through mirroring contemporary writing styles, offering print materials similar in form and function to others of the day, and employing her followers as zealous, free advertisement, the message of Christian Science spread rapidly.
The attacks on Eddy’s reputation—for they were numerous—were met with quick, decisive action. The charisma of Eddy’s own personality and her skill with a pen changed what may have been a disaster into a triumph. Even in her declining years, those closest to her maintained her reputation giving her a legacy which persists to this day.