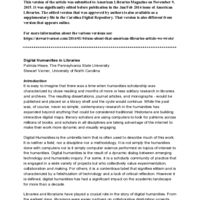 These materials reflect work done for a 2016 article for American Libraries magazine; see "Related URL" field in this item record. In writing the piece, the authors were charged with interviewing a variety of librarians about digital humanities. The originally submitted manuscript, which serves as the main record here, includes perspectives on digital humanities from academic librarians, a public librarian, and two school librarians. The subsequent published version, edited by American Libraries, retained most of the academic librarians' quotations but omitted the view points of the other librarians. It also includes quotations from an interview with the vendor, Gale Cengage, which was conducted by American Libraries, not the authors. The authors were not aware of of these quotes prior to publication of the article. Hence, the authors provide two supplementary files with the main record: 1) the last version of the article the authors submitted American Libraries. This is the version they expected would be published. 2) the text of a blog post the authors wrote after the published version appeared.