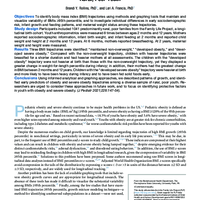 Results Three BMI trajectories were identified: “maintained non-overweight,” “developed obesity,” and “developed severe obesity.” Compared with the non-overweight trajectory, children with heavier trajectories were breastfed for a shorter duration and had heavier mothers at all assessments. The children with the “developed obesity” trajectory were not heavier at birth than those with the non-overweight trajectory, yet they displayed a greater change in weight-for-length percentile during infancy; in addition, their mothers had the greatest change in BMI between 2 months and 12 years. Children with the “developed severe obesity” trajectory were heavier at birth and more likely to have been heavy during infancy and to have been fed solid foods early.

Conclusions Using informed analytical and graphing approaches, we described patterns of growth, and identified early predictors of obesity and severe obesity trajectories among a diverse sample of rural, poor youth. Researchers are urged to consider these approaches in future work, and to focus on identifying protective factors in youth with obesity and severe obesity.