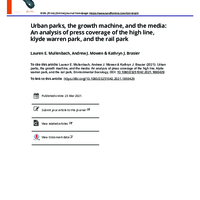 Urban parks, the growth machine, and the media