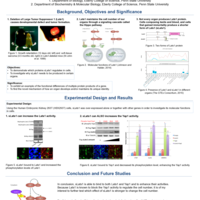 During the course of development, cells undergo numerous rounds of cell division followed by differentiation to form a unique functional unit called an organ. Once an organ reaches to a certain size, its size is maintained throughout the organism’s lifetime. This whole process is accomplished by factors that signal between and within cells.

Hippo pathway is a signaling pathway that suppresses cell division and promotes cell death. One of the main components in the pathway is a kinase called Large Tumor Suppressor 1 (Lats1). Lats1 blocks the oncogenic activity of its downstream substrate, Yes-Associated Protein 1 (Yap1), through phosphorylation. Lats1 is ubiquitously expressed in our body but, interestingly, some organs and transformed cells express a shorter isoform of Lats1 (sLats1) which lacks its kinase domain. It has been speculated that the regions outside of the kinase domain of Lats1 serves as a regulatory site, such as sites for protein-protein interaction, subcellular localization or other post-translational modifications. However, the role of sLats1 remains unknown.

Here, I demonstrate sLats1 plays an opposite role from Lats1 and may function as an activator of Yap1, using a human cell line. Overexpression of sLats1 results in de-phosphorylation and nuclear localization of Yap1. Activation of Yap1 by sLats1 was also observed through increased expression of genes regulated by Yap1. I will further investigate how sLats1 accomplishes this without its kinase domain. To address this question, I will test several aspects, such as reduction of the kinase activity of Lats1 and other kinases, enhancement of any phosphatase activity, and inhibition of Yap1 from phosphorylation.