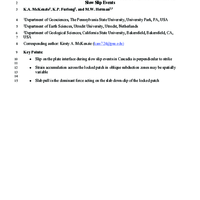 Bi-directional Loading of the Subduction Interface: Evidence from the Kinematics of Slow Slip Events

Subduction zones host some of Earth’s most damaging natural hazards, including megathrust earthquakes and earthquake-induced tsunamis. A major control on the initiation and rupture characteristics of subduction megathrust earthquakes is how the coupled zone along the subduction interface accumulates elastic strain between events. We present results from observations of slow slip events (SSEs) in Cascadia occurring during the inter-seismic period down-dip of the fully coupled zone, which imply that the orientation of strain accumulation within the coupled zone can vary with depth. Inter-seismic GPS motions suggest that forces derived from relative plate motions across a shallow, offshore locked plate interface dominate over decadal timescales. Deeper on the plate interface, below the locked (seismogenic) patch, slip during SSEs dominantly occurs in the up-dip direction, reflecting a dip-parallel force acting on the slab, such as slab pull. This implies that in subduction zones with obliquely convergent plate motions, the seismogenic zone of the megathrust is loaded by forces acting in two discrete directions, leading to a depth-varying orientation of strain accumulation on the plate interface.