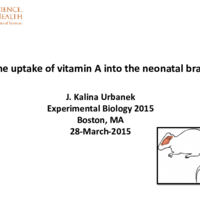 The Uptake of Vitamin A into the Brain - J Kalina Urbanek.pdf

The most rapid phase of brain development occurs during the neonatal period and vitamin A (VA, retinol) is critical for many aspects of this process, including neurogenesis, synaptic plasticity, learning and memory formation. However, the metabolism of VA in a neonatal brain is almost unexplored. The objective of this study was to examine the uptake of VA into the brains of neonatal rats and to assess the effect of VA supplementation on the amount of VA being taken up. On postnatal day 4, pups (n = 103) received an oral dose of either VA (6 μg of retinyl palmitate/g of body weight) or canola oil, both containing 2.5 μCi of [3H]retinol acting as the tracer. Subsequently, pups (n = 4/group/time) were euthanized at 13 time points from 30 min to 24 d after dose administration. The uptake of VA was estimated using the Windows version of the Simulation, Analysis and Modeling software. The results showed that the mass of retinol in the brain was closely dependent on its mass in plasma over time and that the uptake of VA into the brain involved both postprandial chylomicrons as well as the retinol-binding protein. VA supplementation increased the uptake of chylomicron-derived VA from 0.1 nmol/d in the control group to 4.8 nmol/d in the supplemented group. These results indicate that chylomicrons may be a primary mechanism of delivering the recently ingested, dietary VA into a neonatal brain.