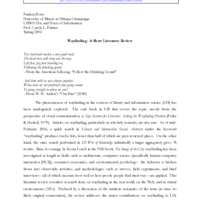 Since its coinage by Kevin Lynch in his 1960 book, The Image of the City, wayfinding has been investigated at length in fields such as architecture, computer science (specifically human-computer interaction [HCI]), consumer economics, and environmental psychology: the behavior is broken down into observable activities, and methodologies such as surveys, field experiments, and brief interviewsâall of which measure how well or how poorly people find their wayâare applied. This brief literature review considers research done on wayfinding in the real world, on the Web, and in virtual environments (VEs). Prefaced by a discussion of the intrinsic semantics of the term (to trace its likely original connotation), the review addresses the major contributions on wayfinding to LIS, followed by a survey of some of the studies done in other fields, in an effort to begin to understand how to orient the subject for more extensive research in LIS. (This paper was written for LIS503: Use and Users of Information, taught by Professor Carole L. Palmer, in Spring 2006 at the University of Illinois at Urbana-Champaign.)