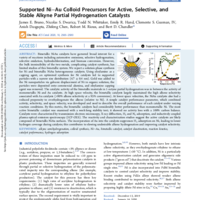 Bimetallic NiAu catalysts have garnered broad interest for a variety of reactions including automotive emissions, selective hydrogenation, selective oxidation, hydrodechlorination, and biomass conversion. However, the bulk immiscibility of the two metals, complicating catalyst synthesis, has limited studies of this bimetallic system. We report a solution-phase synthesis for Ni and bimetallic NiAu heterogeneous catalysts. Using oleylamine as a capping agent, an optimized synthesis for Ni catalysts led to supported particles with a narrow size distribution (4.7 ± 0.4 nm). Gold was added to the Ni nanoparticles via galvanic displacement of Ni in organic solution, the particles were deposited onto commercial alumina, and oleylamine capping agent was removed. The catalytic activity of the bimetallic materials in 1-octyne partial hydrogenation was in between the activity of monometallic Ni and Au catalysts. At high space velocity, the bimetallic catalysts largely maintained the high alkene selectivity associated with Au catalysts (>90% alkene selectivity at a 95% conversion). At lower space velocities, the NiAu catalysts also had a reduced propensity to overhydrogenate the alkene (relative to Ni). A simple catalyst performance parameter, which combined activity, selectivity, and space velocity, was developed and used to describe the overall performance of each catalyst under varying reaction conditions. By this metric, the bimetallic catalysts had considerably better performance than monometallic Ni. The most active bimetallic catalyst was examined with a week-long stability test; it showed no activity loss with a 100% carbon balance. Catalysts were characterized by transmission electron microscopy, X-ray diffraction, H2 and N2 adsorption, and inductively coupled plasma-optical emission spectroscopy (ICP-OES). The reactivity and characterization studies suggest the active catalysts are likely composed of bimetallic NiAu surfaces. The incorporation of Au into the catalysts suppresses H2 adsorption on Ni, leading to lower hydrogen coverage during catalysis; this contributes to slowing undesirable alkene hydrogenation and improving catalyst selectivity.