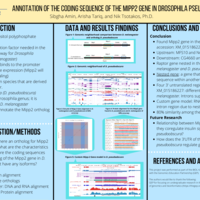 Mipp2 is one of the many genes found in signaling and metabolic pathways across the Drosophila genus, most importantly in the insulin signaling pathway. The coding sequences (exons) of the Mipp2 ortholog in Drosphila pseudoobscura was characterized and annoyed based on it homology with the Drosophila melanogaster ortholog using the respective genome assemblies. Mipp2 in D. melanogaster was aligned for DNA, RNA, and protein sequence data against the potential ortholog D. Pseudoobscura in the UCSC genome browser. Closely related regions of the genes were compared for their protein alignments to discover the ortholog of Mipp2 in D. pseudoobscura. Genomic neighborhoods of Mipp2 were characterized in both specifics to further confirm the identity of the target gene in D. pseudoobscura. We identified five distinct exons and verified them in the Gene Model Checker software using the coding sequence coordinates, genome assembly, and the stop codon coordinates. A similarity of 80% was determined in protein alignments between the two species. A dot plot was generated to show the differences in the protein sequence alignments between the two orthologs. Interestingly, Raptor, another gene involved in the insulin signaling pathway, is nested within the Mipp2 locus in both species. Moreover, there are four additional untranslated regions (UTRs) exclusively in D. pseudoobscura. These 3'-UTRs could be potential regulatory regions of the gene. Using the collected data, the Mipp2-PA gene model for D. pseudoobscura was generated. This project was performed as part of the BIOL 422: Advanced Genetics class, in conjunction with the Genomics Education Partnership (GEP).