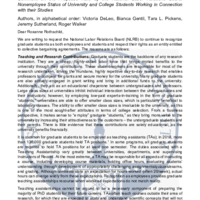 Comment on the Proposed Rule by the National Labor Relations Board

We request the NLRB continue to recognize graduate students as both employees and students and respects their rights as an entity entitled to collective bargaining agreements. The reasons are summarized below, see PDF for the entirety. Teaching/Research Contributions: Graduate students are the backbone of any research institution. These student-workers are responsible for most of the research undertaken, driving the mundane, highly repetitive day-to-day research that enables professors to compete for grants and secure money for the university. Many graduate students are also actively engaged in grant writing and bring in additional funds to the university. Additionally, graduate Teaching Assistants (TAs) act as educational chaperones between undergraduates and professors.There is little evidence that this contribution is solely educational, as the university benefits financially. Although contracts state an expectation for TA hours worked (~ 20/wk), actual hours can diverge wildly from these expectations. Recognition as employees provides graduate TAs recourse when workload expectations do not match reality. TA-ships cannot be argued a necessary component of preparing the majority of PhD students for their future careers, unlikely to be in academia. TAs often teach courses outside their area of research, for which they are expected to study and understand scientific concepts that will not directly translate to research in their field. Right to Affordable Healthcare: Graduate students deserve the right to collective bargaining when it comes to health coverage, as they are a particularly vulnerable population due to the low wages they are paid to perform a job that, by design, necessitates far beyond a 40 hour work week with no overtime benefits. It is a common misconception that graduate students are all fresh-faced youths straight from undergraduate coursework. Even as far back as the 1980s, more than half of all graduate students were over 30. The number of non-traditional students has increased, and many have a spouse and/or family to support. They therefore require support such as affordable healthcare, and this ruling would likely promote their mass exodus out of academia, as they are forced to choose between education or providing for their family. The traditional students would likely follow along as the benefits dry up and the costs are passed to them. Undergraduate Student Employees Deserve Rights Too: Graduate workers are not the only students who could be hurt by the proposed rule change. Graduate students and undergraduate students alike may rely on financial compensation from the university for their work as well as healthcare. Thus, both deserve recognition as students and employees. Double Standards: Universities have blurred the lines between student and employee when it comes to their student athletes, in fact, some states are moving to recognize the economic reality of the student athlete/university relationship by introducing legislation to allow student athletes to receive compensation for their likenesses. The performance of student athletes provides financial benefit to the university through ticket and merchandise sales in much the same way the work of undergraduate and graduate students provides financial benefit to the university in the form of grants, intellectual property, and low-cost teaching assistance. Long-Term Effects: The potential impacts this decision could have on graduate student enrollment and universities as outlined above will likely ripple out, which could tarnish the United States' competitiveness as a global leader. A decline in economic outcomes for its citizens is apparent, due to the systemic effects that will result from devaluing the higher education of Americans and making it even more difficult for The Problem Solvers of Tomorrow to get a fair chance. Universities Serve the Public: Private universities accept funding from government agencies, thus, the institutions affected by this ruling are primarily both funded by and beneficiaries to the public, epicenters for research and innovation. Innovations for which the United States has partnered with and depended on for improved public and environmental health, increased military dominance, and private sector gains. Acting as hubs of inventiveness and cultural activitieswhere concerts, plays, public lectures, and political debates occurthese institutions are vital to the economic development and creative economy for the communities they serve. Conclusion: Overall, changing the status of graduate students from employee to merely student, serves no clear purpose other than increasing the divide between the wealthy and the poor. By removing the rights of graduate students to collective bargaining, the NLRB is leaving them vulnerable to the whims of the university, and this will surely lead to a decrease in prospective graduate students who simply cannot afford the luxury of a higher education.