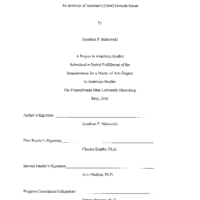 Fantasy sports – in which fans ‘draft’ players and follow their progress through compiled statistical measures – is a major new development in American fan culture over the last generation. While fantasy sports are garnering success across many different sports, this thesis focuses on football since it has become the most lucrative and visible form of fantasy sports in both the sport and popular culture. The popularity of the game continues to rise exponentially, which, ironically, is borne out by recent decisions from state governments to regulate the fantasy sports industry (that is, to gain a piece of the financial pie for the state). This thesis will explore the way American’s consume and critique the fantasy game. To achieve this goal, this paper first explores the transferable skills gained from playing fantasy football as they are compared to the New York Stock Exchange; looking at auction and snake drafts, the fantasy team is equated to building a stock portfolio. Following the individual skills linked to playing fantasy, this thesis then examines the ways fantasy football has infiltrated popular culture. This section looks in particular at Matthew Berry’s New York Times best-selling novel Fantasy Life, FX Network’s television series The League, and various fantasy-related news articles surrounding issues in popular culture. Last, my research turns toward a specific case by taking an ethnographical approach to fantasy football by interviewing people in my own fantasy football leagues. Interviews are used to evaluate how fantasy football impacts and shapes the basis and context for which Americans view the NFL.