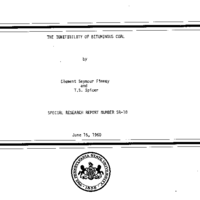 THE IGNITIBILITY OF BITUMINOUS COAL

Special Research Report SR-18 The ignitibility behaviour of eleven coals ranging in rank trom low volatile bituminous to high volatile C bituminous has been examined by means of two laboratory tests. The ignition temperatures of dusts ranging in size from -6o+200 to -325 mesh (U. S. Sieve a.,_ries) were determined in oxygen and in air using the Godbert inflammability apparatus, in which 0.2 gram of coal was blown downwards through a heated, vertical ignition tube using 2000 cc. of gas at a pressure of 1211 mercury. The crossing-point temperatures in oxygen of 3.0 grBJI sampies of the -6o+200 mesh coals were obtained with a Setchk.in 'tg~ n1tion Apparatus :f.or solids. In this test the temperature/time history of a coal was compared with that of the preheated oxygen with which it reacted under the standard conditions of the test. The crossing-point temperature was that at which the temperature/time curves of coal and 01tygen intersected. No correlation ,between the volatile content of the coals and either their ignition point temperatures in air or oxygen, or their crossing point temperatures in o~ygEtn, was found. Results with the inflammability apparatus showed, however, a definite decrease in ignition temperature with decrease in particle size. The following conclusions were drawn from the study: (1) The ~gnitibility of a bituminous coal is determined not by its total volatile content, but rather by the surface properties .of both the original and partially charred or carbonised particles. (2) Differences in the ignitibility of the bituminous class of coals are less marked than has sometimes been supposed; provided that sufficient oxygen is available, bituminous coals over a wide range of volatile contents will ignite at much the same ain.bient temperature wheh projected into a suitable hot environment in the size consist used for pulverised fuel firing, (3) The ignitibility of a cloud of coal dust particles increase~ as the particle size decreases. Particle size is more important in the ignition process than is the:i:rifluence of volatile content. I (4) In a dust suspension consisting of particles df dLfferent sizes, ignition commences with the finer particles and spreads throughout the whole mixture. As long as an adequate proportion of super~ fines is present, quite a percentage of coarse material can be tolerated. (5) The experimental evidence supports the "the.rmal" or "direct ox.i dation" theory of ignition, which maintains that ignition occurs directly, without the distillation of volatile matter.