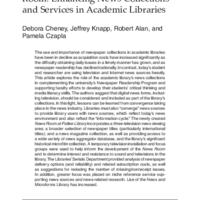 The use and importance of newspaper collections in academic libraries have been in decline as acquisition costs have increased significantly as the difficulty obtaining daily issues in a timely manner has grown, and as newspaper readership has declined nationally. In contrast, today's student and researcher are using television and Internet news sources heavily. This article explores the role of the academic library's news collections in complementing the university's Newspaper Readership Program and supporting faculty efforts to develop their students' critical thinking and media literacy skills. The authors suggest that digital news forms, including television, should be considered and included as part of the library's collections. In this light, lessons can be learned from convergence taking place in the news industry. Libraries must also "converge" news sources to provide library users with news sources, which reflect today's news environment and also reflect the "information cycle." The newly created News Room at Pattee Library incorporates a three-television news viewing area; a broader selection of newspaper titles (particularly international titles); and a news magazine collection, as well as providing access to a wide variety of news aggregator database, and the library's significant historical microfilm collection. A temporary television installation and focus groups were used to help inform the development of the News Room and to determine interest and resistance to sound and televisions in the library. The Libraries' Serials Department provided analysis of newspaper delivery options (and reliability) and related subscription costs, as well as suggestions for reducing the number of missing/nonreceipt issues. In addition, greater focus was placed on niche reference service supporting news sources and news-related research. Use of the News and Microforms Library has increased.