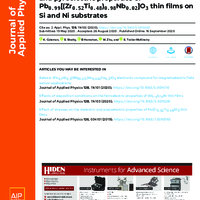 Extrinsic contributions to the dielectric and pyroelectric properties of Pb0.99[(Zr0.52Ti0.48)0.98Nb0.02]O3 thin films on Si and Ni substrates

The character of extrinsic contributions to the dielectric and pyroelectric properties of Pb0.99[(Zr0.52Ti0.48)0.98Nb0.02]O3 (PZT) films on Ni foil and Si wafers was explored using Rayleigh analysis, third harmonic phase angle, and Preisach analysis from 15 K to 296 K. The temperature dependence of the domain structure, domain wall mobility, and domain switching influenced the intrinsic, extrinsic, and secondary contributions to the pyroelectric coefficients. This, in turn, produced markedly different room temperature pyroelectric coefficients of ∼250 μC/m2 K and ∼100 μC/m2 K, respectively, for films on Ni and Si. At room temperature, the dielectric irreversible Rayleigh parameter αray was 15.5 ± 0.1 and 28.4 ± 1.6 cm/kV for PZT on Si and Ni, respectively. The higher αray value for the Ni sample suggests more domain wall motion at room temperature, which was attributed to the lower stiffness on the Ni foil compared to the ∼500 μm thick Si substrate. Below 200 K, αray for the PZT Si sample exceeds that of the Ni/PZT sample. This is believed to arise from differences in the energy landscape of pinning centers for the domain wall motion. It is proposed that the residual stresses not only set the preferred domain structures but also the barrier heights for domain wall motion and domain switching.