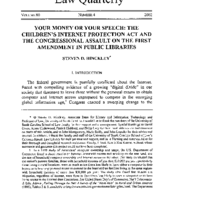 Your Money or Your Speech.pdf

Abstract:
This article examines the inherent conflict between two Congressional approaches to public access to the Internet - the provision of federal funding support to schools and public libraries to ensure broad access to online information regardless of financial means, and federal restrictions on children's use of school and public library computers to access content that the government feels could be harmful to them. It analyzes the efficacy and constitutionality of the Children's Internet Protection Act (CIPA), Congress's attempt to use its powers of the purse to control objectionable online content in the very institutions it has used to promote equality of Internet access, particularly for children.

The article looks first at Congress's early attempts to directly control categories of online speech through the passage of the Communications Decency Act (CDA) and the Child Online Protection Act (COPA), two statutes that proved to be so insensitive to classic First Amendment principles that they were essentially dead on arrival at the courthouse. The article then focuses on Congress's strategic shift away from direct proscriptions of online content and toward control of Internet speech indirectly through the use of its spending power. CIPA attempts to regulate online content by making the distribution of Universal Service Fund (E-Rate) and related federal school and library technology funds contingent upon the recipient institution's agreement to place filtering software on all Internet-accessible computers. The article examines the history of Congress's use of its spending power as a regulatory tool, and takes issue with Congress's description of CIPA's funding conditions as a routine use of that power immune from First Amendment constraints. Arguing that public libraries are limited public forums subsidized by the government for the express purpose of facilitating broad private expression, the article recommends judicial review of CIPA based on the same strict scrutiny principles used by the Supreme Court in Rosenberger and Velazquez to invalidate similar government funding decisions that forced viewpoint and content-based regulation of private speech.

The article contends that Congress has not met its burden under strict scrutiny of showing that Internet filtering in public libraries is constitutionally necessary to achieve the government's interests in protecting children, and argues that software filters cannot possibly be applied without compromising a great deal of library patrons' constitutionally protected online speech. The article concludes that, stripped of the facade of an innocent use of Congress's spending power, the Children's Internet Protection Act is merely the Computer Decency Act and the Child Online Protection Act in disguise - yet another clumsy congressional attempt to censor Internet content without sufficient concern for the damage it will do to the First Amendment rights of library patrons, many of whom use libraries as the only place where they can gain access to the incredible wealth of diverse information available on the Internet.