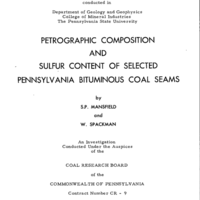 Special Research Report SR-50 Eleven column samples of bituminous coal seams were collected in the Commonwealth of Pennsylvania. These were from three general areas: near Clearfield, Clearfield County; near Corsica, Jefferson.County; and near the western border of the state, Each column was cut vertically so that fractions were available for megas copic and microscopic petrographic examination and sulfur analyses. Megascopic examination of polished master columns indicated that seven lithotypes tclarain I, clarain II, clarain III, durain, fusain, bone, and inorganic partings) were present in these samples. Further, ^ lithotype variation existed between the samples with a general tendency for the coal seams to become more durainic in a westward direction across the bituminous coal field. Quantative microscopic petrographic analyses were made on all samples and representatives of the vitrinite, exinite, and inertinite suites of macerals were recognized as well as pyrite and other mineral matter. Variations in petrographic composition were recognized within the column samples, indicating the microscopic expression of the lithotypes noted earlier. Sulfur analyses were made of each inch level of each column sample and" vertical sulfur profiles were drawn. From these it was noted that sulfur content was not constant from the top to the base of the coal seams. Zones of high sulfur accumulation were most often associated with small fusain lenses within clarain III lithotypes. Finally, a general tendency was noted for an increase in sulfur content of the coal seams from east to west across the bituminous coal field