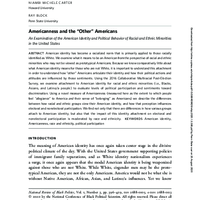 Americanness and the ‘Other’ Americans: An Examination of the American Identity and Political Behavior of Racial and Ethnic Minorities in the United States

<jats:p>American identity has become a racialized norm that is primarily applied to those racially identified as White. We examine what it means to be an American from the perspective of racial and ethnic minorities who may not be viewed as prototypical Americans. Because we know comparatively little about what American identity means for those who are not White, it is important to understand this attachment in order to understand how “other” Americans articulate their identity and how their political actions and attitudes are influenced by those sentiments. Using the 2016 Collaborative Multiracial Post-Election Survey, we examine attachment to American identity for racial and ethnic minorities (i.e., Blacks, Asians, and Latino/a people) to evaluate levels of political participation and sentiments toward discrimination. Using a novel measure of Americanness (measured here as the extent to which people feel “allegiance” to America and their sense of “belonging” as Americans) we describe the differences between how racial and ethnic groups view their American identity, and how that perception influences electoral and nonelectoral participation. We find not only that there are differences in how various groups attach to American identity, but also that the impact of this identity attachment on electoral and nonelectoral participation is moderated by race and ethnicity./jats:p

Published as [Greene, S., Gray, G., Carter, N.M., and Block, R. (2020). Americanness and the “Other” Americans. National Review of Black Politics 1, 396–429.]. © 2020 by the Regents of the University of California. Copying and permissions notice: Authorization to copy this content beyond fair use (as specified in Sections 107 and 108 of the U. S. Copyright Law) for internal or personal use, or the internal or personal use of specific clients, is granted by the Regents of the University of California for libraries and other users, provided that they are registered with and pay the specified fee via Rightslink® or directly with the Copyright Clearance Center.