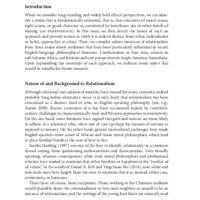 When we consider long‐standing and widely held ethical perspectives, we can identify a strain that is fundamentally relational, that is, that conceives of moral status, right action, or good character as constituted by beneficent ties or other bonds of sharing. In this essay, we first sketch the basics of such an approach and provide reason to think it is indeed distinct from other, individualist or holist, approaches to ethics. Then, we consider salient instances of relationalism from three major moral traditions that have been particularly influential in recent English‐language philosophical literature: Confucianism in East Asia, ubuntu in sub‐Saharan Africa, and feminist and care perspectives in Anglo‐America‐Australasia. Upon expounding the essentials of each approach, we indicate some topics that would be suitable for future research.