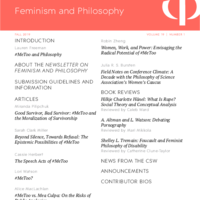 Beyond Silence, Towards Refusal: The Epistemic Possibilities of #MeToo

There are many ways to understand the meanings of the #MeToo movement. Analyses of its significance have proliferated in popular media; some academic analyses have also recently appeared. Commentary on the philosophical and epistemic significance of the #MeToo movement has been less plentiful. The specific moment of the #MeToo movement in which Dr. Christine Blasey Ford’s testimony garnered a widespread social media response from sexual violence survivors highlighted the power of a particular form of epistemic response, what I call ‘epistemic refusal.’ In breaking our silence, those of us who are sexual violence survivors have used this strategy to refuse the dominant epistemic structures that have kept us tightly in check. Mass informal disclosure of survivor status represented in conjunction with hashtags such as #MeToo, #WhyIDidntReport, and #BelieveHer creates space for epistemic, ethical, and political community between survivors of sexual violence by denying hegemonic epistemic discourses of contemporary rape culture. Regarding Dr. Blasey Ford’s testimony and the social media response it garnered, analysis of three main elements proves particularly illuminating: the nature of mass informal disclosure of sexual violence, what the hashtag #WhyIDidntReport reveals about refusing silence, and what the hashtags #BelieveHer and #BelieveSurvivors can show us about what it takes to begin to overcome epistemic gaslighting.