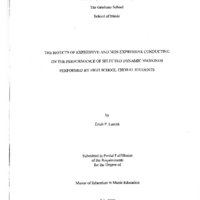 THE EFFECTS OF EXPRESSIVE AND NON-EXPRESSIVE CONDUCTING ON THE PERFORMANCE OF SELECTED DYNAMIC MARKINGS PERFORMED BY HIGH SCHOOL CHORAL STUDENTS - Erich P. Lascek

The purpose of this study was to investigate the effects of different conducting styles on high school choral students’ ability to sing selected dynamics accurately. Specifically, this research sought to answer the following questions. 1. Do high school choral students perform selected dynamic marking differently in two conducting conditions: (a) conductor using expressive gestures and (b) conductor using non-expressive (time beating) gestures? 2. Does performance order affect student performance accuracy of selected dynamic markings? To answer these questions, the research audiotaped subjects (N=65) singing two eight-measure melodies. The subjects performed in eight groups according to voice parts. While singing, the subjects followed a videotape of an unfamiliar conductor conducting the two excerpts in each of the two conducting conditions. Subjects’ audiotaped performances were then adjudicated for dynamic accuracy by a panel of three judges. The data were analyzed by percentage and conclusions made by the research in regard to the research questions. Analysis of the data revealed only a slight increase (5%) in the group’s accuracy score when the expressive conducting treatment was used compared to the non-expressive conducting treatment. In regard to performance order, the melody performed first by each group, regardless of conducting style, received a 12% higher dynamic accuracy score than the second melody performed by each group. The dynamic accuracy scores for the first performances of each group were then compared to determine whether expressive or non-expressive conducting style had any effect. The data revealed, for the first performance, the non-expressively conducted melodies performed received a higher dynamic score (13%) than the expressively conducted melodies. Conversely, the expressively conducted melodies performed second received a 23% higher dynamic score than the non-expressively conducted melodies. The researcher concluded that perhaps the unfamiliarity of the conductor had an effect on the subjects’ performances. The subjects may have known the material better by the second performance and were therefore able to watch the conductor more carefully. Also, perhaps they better understood the conductor’s gestures on the second melody and were using the first melody as a frame of reference. Further research should investigate the differences between subjects’ responding to familiar and unfamiliar conductors.