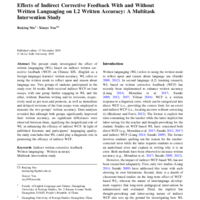 Effects of indirect corrective feedback with and without written languaging on L2 written accuracy: A multitask intervention study