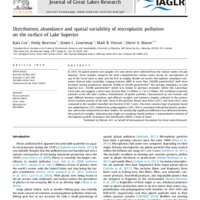 Distribution, abundance and spatial variability of microplastic pollution on the surface of Lake Superior

In 2014, 94 paired neuston net samples (0.5 mm mesh) were collected from the surface waters of Lake Superior. These samples comprise the most comprehensive surface water survey for microplastics of any of the Great Lakes to date, and the first to employ double net trawls. Microplastic abundance estimates showed wide variability, ranging between 4000 to more than 100,000 particles/km2 with most locations having abundances between 20,000 to 50,000 particles/km2. The average abundance in Lake Superior was ~30,000 particles/km2 which was similar to previous estimates within this Laurentian Great Lake and suggests a total count of more than 2.4 billion (1.7 to 3.3 billion, 95% confidence interval) particles across the lake's surface. Distributions of plastic particles, characterized by size fraction and type, differed between nearshore and offshore samples, and between samples collected in the eastern versus western portion of the lake. Most of the particles found were fibers (67%), and most (62%) were contained in the smallest classified size fraction (0.50–1 mm). The most common type of polymer found was polyethylene (51%), followed by polypropylene (19%). This is consistent with global plastics production and results obtained from other studies. No statistically significant difference was detected between the paired net samples, indicating that single net sampling should produce a representative estimate of microplastic particle abundance and distribution within a body of water.