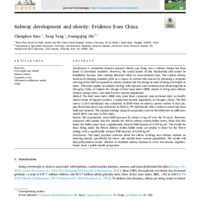 Introduction: A correlation between reduced obesity and living near a subway station has been found in developed countries. However, the causal nature of this relationship still cannot be established because most existing literature relies on cross-sectional data. The current subway boom in developing countries gives us a chance to address this concern by obtaining a temporal ordering of the shift in exposure to subway stations and the change in rates of being overweight or obese. This study applies an analysis strategy with repeated cross-sectional data about migrants in Chengdu, China, to explore the change in body mass index (BMI) related to living near subway stations among lower- and middle-lower income population. Method: The body mass index (BMI) data come from a repeated cross-sectional study on health-related issues of migrant workers, a typical low-income population, in Chengdu, China. The first survey (1,015 individuals) was conducted in 2008 when no subway system existed in that city, and the second survey was conducted in 2018 (1,797 individuals) after a subway system had been built and matured. The analysis strategy using the propensity score in the difference-in-difference model (DID) was used in this study. Results: The respondents’ mean BMI increased by about 1.0 kg/m2 over the 10 years. However, compared with people who live outside the 400-m subway station buffer zones, those who live inside the buffer zones have a significantly reduced BMI increase of 0.545 kg/m2. The results for those living inside the 800-m subway station buffer zones are similar to those for the 400-m setting, with a significantly reduced BMI increase of 0.434 kg/m2. Conclusions: This study provides evidence about the effects of living near subway stations on reducing obesity, specifically for lower- and middle-lower income population. The results will help policymakers decide whether to establish subway stations to cover low-income neighborhoods, from a public health perspective.