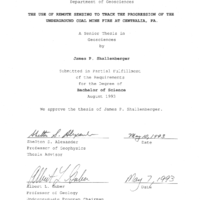 THE USE OF REMOTE SENSING TO TRACK THE PROGRESSION OF THE UNDERGROUND COAL MINE FIRE AT CENTRALIA, PA.

An underground coal mine fire has raged out of control in the anthracite seams beneath Centralia Borough and the surrounding area since 1962. An important factor for the elimination of this fire is to determine its subsurface extent. The traditional method of delineating the fire's boundary has been to drill boreholes, install thermocouples and combustion gas detectors, and infer the location of the fire from the data generated in this fashion. The purpose of this thesis is to evaluate the effectiveness of using remote sensing observations to determine the fire's position below ground. A variety of remote sensing data, collected in different formats and at different scales, was examined including Landsat, Skylab, U2, C-130, and aircraft-mounted thermal infrared (IR) sensors to detect any thermally-induced anomalies. It was found that successive overflights using thermal IR detectors performed in 1971, 1980, and 1982 best defined the progression of the underground fire. However, distinctive thermal and geobotanical anomalies were evident only in locations where the burning coal seam was at relatively shallow depths, near the coal outcrops. The flow of heat to the surface appears to occur ( in large part) by conduction, although convective heat transfer may also be important locally. To better understand these results, a one­ dimensional model of heat flow by conduction was used to predict the time required for heat produced by burning coal to be expressed at the surface through varying thicknesses of overburden material. The thermal modelling results provide good predictions of the times when surface anomalies actually appeared at detectable levels in the thermal IR images. The modelling further indicates that no detectable surface anomalies will be observed if the burning coal seam is deeper than about 100 feet. The results of this study suggest that remote sensing, particularly repeated thermal IR coverage, provides an effective means of tracking the progression of the coal mine fire when burning coal is less than 100 feet below the surface. Senior thesis in Geosciences, Penn State University