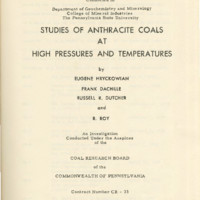 STUDIES OF ANTHRACITE COALS AT HIGH PRESSURES AND TEMPERATURES

Special Research Report SR-38 Anthracite has been treated under conditions of pressures and temperatures higher than those normally associated with its formation. Hydrothermal apparatus was used for studies on sealed samples up to 900°C. and 20,000 psi, and high pressure apparatus was used, with smaller samples, up to 700°C. and 450,000 psi. Results were evaluated by x-ray diffraction, reflectance, microscopy and other diagnostic methods. Changes in reflectance, in morphology and in the mineral assemblages were the most useful guides to the alteration processes which generally resulted in an increased "rank" for the coal . Graphitiz~tion, one important objective, could not be demonstrated clearly by x-ray methods, but it is inferred from reflectance and other data. The increases in reflectance depended chiefly on the temperatures used and on the original rank of the coal, and to a much lesser extent, on the pressures. Fusion of anthracite, not previously reported, was attained at pressures of 2,000 psi at about 425°C . These experiments suggest a potential comparative evaluation method. The volatile evoluti6n from anthracite was controlled by a small water content in the initial charge. At 10,000 psi and 620°C. for example, the equilibrium gas · mixture contained almost 90% methane and only 1% hydrogen, quite the reverse of the usual volatilization studies. The inorganic or ash-forming elements in anthracite were mobilized into mineral assemblages characteristic for the conditions of the experiments. The results permit some estimate of metamorphic processes in the formation of anthracites. They also serve as a beginning in the development of a process which might be useful in the prbduction of special carbons from anthracite.