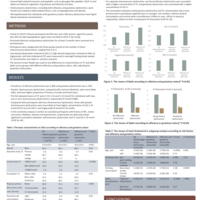 Olfactory and gustatory dysfunctions and lipid profiles: a community-based study.pdf

OBJECTIVE/BACKGROUND Several lipid-related hormones and peptides, such as glucagon-like peptide-1 (GLP-1) and leptin are linked to regulation of gustatory and olfactory function. We thus hypothesized that individuals with gustatory and/or olfactory dysfunction have higher blood cholesterol concentrations. We tested this hypothesis in a Chinese community-based study.

METHODS In this cross-sectional study conducted in 2012, we enrolled 10,072 Chinese participants (8,487 men and 1,585 women, mean age 53.4 years) who did not take hypolipidemic agents. We asked perceived olfactory and gustatory dysfunction for at least 3 months via a questionnaire. Participants were categorized into three groups based on the number of these chemosensory dysfunctions, ranging from 0 to 2. We collected 12-hour overnight fasting blood samples and assessed concentrations of low-density lipoprotein cholesterol (LDL-C), high-density lipoprotein cholesterol (HDL-C), triglyceride, and total cholesterol (TC). TC concentration was taken as a primary outcome of the current analysis. The General Linear Model was used to test differences in concentrations of TC and other lipids across groups with different olfactory and gustatory status, after adjusting for potential confounders such as demographic characteristics, socioeconomic status, smoking, obesity and history of cardiovascular disease, cancer and head injury. We further tested the interaction between potential risk factors and the chemosensory function.

CONCLUSION In this large cross-sectional study, olfactory and gustatory dysfunction was associated with higher blood concentrations of TC. Further prospective study is needed to investigate the temporal relation between these chemosensory dysfunctions and hyperlipidemia.