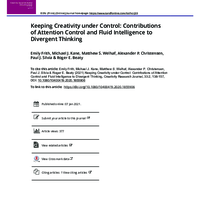 Increasing research efforts are focused on explaining the cognitive bases of creativity. However, it remains unclear when and how cognitive factors such as intelligence and executive function uniquely contribute to performance on creative thinking tasks. Although a relationship between fluid intelligence (Gf) and creative cognition has been well-documented, the underlying mechanism of this relation is unknown. Here, we test one possible mechanism of the Gf–creativity association–attention control (AC)–given AC’s strong association with Gf and its theoretical relevance to creative cognition. We also examine the role of mind wandering (i.e., task-unrelated thought), a failure of AC that is potentially beneficial to creativity. Using latent variable and bifactor models, we investigated the unique contributions of AC to divergent thinking–above the influence of Gf–evaluating the specific and general contributions of AC, Gf, and mind wandering to divergent thinking. We found that a general executive factor (i.e., of the common variance to AC, mind wandering, and Gf indicators) significantly predicted divergent thinking originality (β =.40, p <.001) above and beyond specific Gf and mind wandering factors. Importantly, in the bifactor model, mind wandering was a nonsignificant, negative predictor of divergent thinking performance, and the residual effects of Gf were no longer significant, indicating that the relationship between Gf and divergent thinking is explained by shared variance with a common executive attention factor. This study provides novel evidence suggesting that the relationship between Gf and divergent thinking may be largely driven by the top-down control of attention.