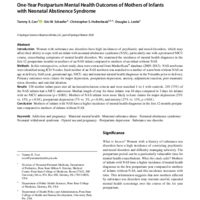 Introduction: Women with substance use disorders have high incidences of psychiatric and mood disorders, which may affect their ability to cope with an infant with neonatal abstinence syndrome (NAS), particularly one with a protracted NICU course, exacerbating symptoms of mental health disorders. We examined the incidence of mental health diagnoses in the first 12 postpartum months in mothers of an NAS infant compared to mothers of an infant without NAS. Methods: In this retrospective, cohort study, data were extracted from MarketScan® database (2005–2013). NAS newborns were identified using ICD-9 codes. Each mother of an NAS newborn was matched to a mother of a newborn without NAS on age at delivery, birth year, gestational age, NICU stay and maternal mental health diagnoses in the 9 months prior to delivery. Primary outcomes were claims for major depression, postpartum depression, anxiety, adjustment reaction, post-traumatic stress disorder, and suicidal ideation. Results: 338 mother-infant pairs met all inclusion/exclusion criteria and were matched 1-to-1 with controls. 245 (73%) of the NAS infants had a NICU admission. Median length of stay for these infants was 10 days compared to 3 days for infants with no NICU admission (p < 0.001). Mothers of NAS infants were more likely to have claims for major depression (33% vs. 15%, p < 0.01), postpartum depression (7% vs. 3%, p = 0.04), and anxiety (27% vs. 13%, p < 0.01). Conclusion: Mothers of infants with NAS have a higher incidence of mental health diagnoses in the first 12 months postpartum compared to mothers of infants without NAS.