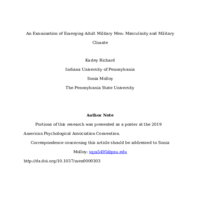 The U.S. military includes more minority military members than ever before. Despite this, several issues stand in the way of the safe inclusion of minority military members. Researchers have noted health concerns for men who adhere to traditionally masculine ideals. In this study, 9 emergent adult U.S. military men were interviewed about their perceptions of masculinity, femininity, military culture, and sexual scripts to gain a deeper understanding of the current U.S. military climate for emergent adult military men. Using grounded theory methods, analysis of the interviews revealed themes of the role of gender and military scripts and the perceptions of policy and culture that contribute to a tumultuous U.S. military climate. These findings contributed to an emergent grounded theory model that can be used to understand current issues in the U.S. military and promote policy and training. Implications for future research, policymakers, and military leadership are discussed to address the safe inclusion of minority members and the health and well-being of military members.

© American Psychological Association, 2020-10-01. This paper is not the copy of record and may not exactly replicate the authoritative document published in the APA journal. Please do not copy or cite without author's permission. The final article is available, upon publication, at: https://doi.org/10.1037/men0000303