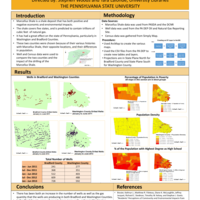 A Comparative Analysis of Marcellus Shale Drilling in Washington and Bradford Counties, Pennsylvania

Marcellus Shale is a shale deposit that has both positive and negative economic and environmental impacts. The shale covers five states, and is predicted to contain trillions of cubic feet of natural gas. The Marcellus Shale has had a great effect on the state of Pennsylvania, particularly in Washington and Bradford Counties. These two counties were chosen because of their various histories with Marcellus Shale, their opposite locations, and their differences in population. Through the use of ArcGIS, the researcher was able to use both well and Census data - including population density, legislative boundaries, percent rural and urban, and high school education - to compare the two counties and the impact that the drilling of the Marcellus Shale has had.