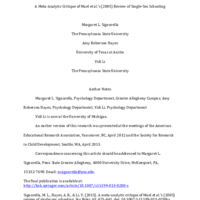 Continued controversy in the United States over the relation of school gender composition to student outcomes is partially due to the failure to reach consensus on how to evaluate the research and the conclusions to be drawn from the research. In this review we examine major problems in the available research on single-sex schools, in terms of both theory and methodology. We critically examine the major review done by Mael, Alonso, Gibson, Rogers, and Smith (2005) and identify serious problems in studies under review and the review methods. Drawing from both U.S. and non-U.S. samples, a subset of outcome measures (mathematical performance, verbal performance, self-esteem or self-concept) were analyzed using meta-analytic techniques. No significant effects for school gender composition were observed for either mathematical performance or self measures. There was a small advantage observed on verbal performance for students in single-sex schools, but in this comparison there was a strong relation between the direction of the effect on the outcome measure and pre-existing differences. For the three comparisons combined, preexisting student differences in SES or cognitive performance revealed advantages to students in single-sex schools. In conjunction with research showing that control of preexisting differences reduces or removes single-sex school advantages, this review provides support for the position that single-sex schools may offer no advantage to student cognitive performance or social development, but rather may reflect the consequences of a more select and advantaged student population.