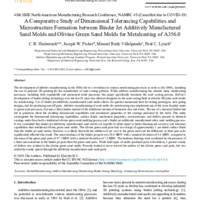 A Comparative Study of Dimensional Tolerancing Capabilities and Microstructure Formation between Binder Jet Additively Manufactured Sand Molds and Olivine Green Sand Molds for Metalcasting of A356.0

Abstract: The development of additive manufacturing in the 1980s led to a revolution in various metalcasting processes as early as the 1990s, including the use of polymer 3D printing for the manufacture of sand casting patterns. While additive manufacturing has entered many metalcasting processes, including both expendable and permanent mold processes, this paper specifically examines the sand casting process. ExOne’s development of binder jetting technology over the last 20 years has allowed designers in the sand casting field to directly 3D print sand molds for metalcasting. Use of binder jet additively manufactured sand molds allows for quicker turnaround time for testing prototypes, new gating designs, and for producing one-off parts. Additive manufacturing of sand molds for metalcasting may implement any of the same foundry sands as green sand processes, but uses a furan binder instead of the traditional mixture of bentonite clay and water. The use of a chemical binder had led to questions about the resulting dimensional capabilities and mechanical properties of the castings produced by the mold. This study investigated the dimensional tolerancing capabilities, surface finish, mechanical properties, microstructure, and defects present in identical castings made from both a traditional olivine green sand molding process and a binder jet additively manufactured silica sand molding process. It was concluded that binder jet additively manufactured sand molds are capable of either equal or better dimensional accuracy and tolerance capabilities than traditional olivine green sand molds. The olivine green sand parts had an average of approximately 1 μm better surface finish than the binder jet sand molds; however, it is likely that both the addition of sea coal to the green sand and the difference in final part color significantly affected this result. The mean hardness of the binder jet parts was 58.9 HBW with a standard deviation of 5.6 HBW, compared to the mean of the green sand parts of 47.7 HBW with a standard deviation of 7.2 HBW. The hardness findings were confirmed by the presence of a finer microstructure in the binder jet parts than the green sand parts. While both types of molds produced parts with defects, a greater variety of defects was evident in the olivine green sand molds. Porosity tended to move toward the surface of the olivine green sand parts, but was relatively evenly spread through the additively manufactured sand mold parts.