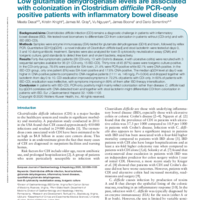 Background/aims Clostridioides difficile infection (CDI) remains a diagnostic challenge in patients with inflammatory bowel disease (IBD). We tested novel biomarkers to differentiate CDI from colonization in patients without (CDI-only) and with IBD (IBD-CDI). Methods Samples were enzyme immunoassay (EIA)-tested for glutamate dehydrogenase (GDH) and toxin, followed by reflex PCR. Quantitative GDH [(qGDH)-a novel indicator of Clostridium difficile load] and stool lactoferrin were tested at days 0, 3 and 10 during antibiotic treatment. Samples were also analyzed for toxin B cytotoxicity neutralization assay (CNA) and toxigenic culture, gold standards to detect free toxin and virulent bacteria, respectively. Results Forty-five symptomatic patients (28 CDI-only, 13 with Crohn's disease, 4 with ulcerative colitis) were recruited with 3 sequential samples available for 36 (21 CDI-only, 15 IBD-CDI). Thirty-nine of 45 (87%) cases were toxigenic culture-positive. In the CDI-only group, 78.6% were positive for EIA-toxin, 21.4% were PCR-positive while 82.1% were CNA-positive. In the IBD-CDI group, only one patient (6%) was EIA-toxin positive and 17.6% CNA-positive. The median qGDH level at day 0 was higher in CNA-positive patients compared to CNA-negative patients (1111 vs. 146 ng/g, P = 0.004) and dropped together with lactoferrin from day 0 to 10. CDI eradication improved symptoms in 72.2% of patients with CDI-only. In 60% of patients with IBD-CDI, eradication was ineffective, with symptoms improving in 89% of them after IBD therapy intensification. Conclusion In patients with IBD-CDI, PCR-only positivity might mainly reflect colonization rather than disease. C. difficile load by qGDH correlates with CNA-detected toxin and together with stool lactoferrin might differentiate CDI from colonization in patients with IBD.