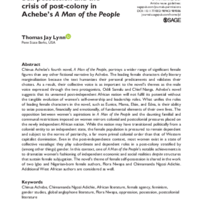 Chinua Achebe’s fourth novel, A Man of the People, portrays a wider range of significant female figures than any other fictional narrative by Achebe. The leading female characters defy literary marginalization because the text humanizes their personal predicaments and validates their choices. As a result, their collective voice is as important to the novel’s themes as the male voice expressed through the two protagonists, Odili Samalu and Chief Nanga. Achebe’s novel suggests that its unnamed post-independent African nation will not fulfil its potential without the tangible evolution of women’s self-ownership and leadership roles. What unifies the roles of leading female characters in the novel, such as Eunice, Mama, Elsie, and Edna, is their ability to seize possession, financially and emotionally, of fundamental elements of their own lives. The opposition between women’s aspirations in A Man of the People and the daunting familial and communal restrictions imposed on women mirrors colonial and postcolonial pressures placed on the newly independent African nation. While the nation may have transitioned politically from a colonial entity to an independent state, the female population is pressured to remain dependent and subject to the norms of patriarchy, a far more primal colonial order than that of Western capitalist domination. Even in the post-independence context, most women exist in a state of collective vassalage: they play subordinate and dependent roles in a post-colony stratified by (among other things) gender. In this context, one of A Man of the People’s notable achievements is to dramatize women’s fashioning of independent economic and social realities despite structures that sustain female subjugation. The novel’s theme of female self-possession is shared in the work of two Igbo and Nigerian-born female authors, Flora Nwapa and Chimamanda Ngozi Adichie. Additional West African authors are considered as well.