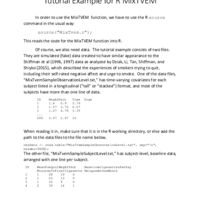 The abstract of this manuscript is as follows: Behavioral scientists increasingly collect intensive longitudinal data (ILD), in which phenomena are measured at high frequency and in real time. In many such studies, it is of interest to describe the pattern of change over time in important variables as well as the changing nature of the relationship between variables. Individuals' trajectories on variables of interest may be far from linear, and the predictive relationship between variables of interest and related covariates may also change over time in a nonlinear way. Time-varying effect models (TVEMs; see Tan, Shiyko, Li, Li, & Dierker, 2012) address these needs by allowing regression coefficients to be smooth, nonlinear functions of time rather than constants. However, it is possible that not only observed covariates but also unknown, latent variables may be related to the outcome. That is, regression coefficients may change over time and also vary for different kinds of individuals. Therefore, we describe a finite mixture version of TVEM for situations in which the population is heterogeneous and in which a single trajectory would conceal important, inter-individual differences. This extended approach, MixTVEM, combines finite mixture modeling with non- or semi-parametric regression modeling, in order to describe a complex pattern of change over time for distinct latent classes of individuals. The usefulness of the method is demonstrated in an empirical example from a smoking cessation study. We provide a versatile SAS macro and R function for fitting MixTVEMs.

An obselete version of TVEM_Mix_Normal.sas which assumed independence of observations within subjects

An obselete version of MixTVEM.r which assumed independence of observations within subjects 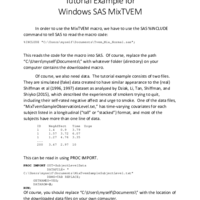 A tutorial on how to use TVEM_Mix_Normal.sas

SAS demonstration code to call "TVEM_Mix_Normal.sas" for a sample analysis

A tutorial in how to use MixTVEM.r