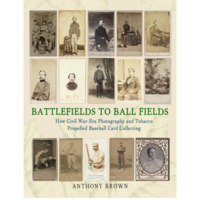 Baseball card collecting is a common activity practiced by people of all ages throughout our country. If you have ever wondered how America's first baseball cards came to be and how the hobby of collecting took shape than this thesis will be of interest to you. In order to fully understand how baseball cards and baseball stars were first conceived it is important to step back and look at the prior processes that enabled their creation. The main areas that are investigated in this study include the growth and development of nineteenth-century photography, baseball becoming a popular sport in America, the tobacco industry becoming mechanized and embarking on new advertising schemes, and how the Civil War set the backdrop for an evolving culture including these other topics. Some of the first mass produced photographs, called cartes-de-visite, are explored and described as the foundational blocks on which the first baseball cards could be realized. The Civil War, which engrossed America in the first half of the 1860s, created a platform on which heroes were discovered and technology advanced along side the struggle to unite a divided country. At the war's conclusion, recovery efforts included embracing industrial advancements and the creation of new national heroes. Increasingly throughout the rest of the century, people became consumers and relied more on mass-produced goods. Nascent advertising helped producers sell their items and consumers decide which products they wanted. Leisure time became more available than ever and new pastimes arose. The sport of baseball matured in the decades after the war and became a national phenomenon. Baseball stars were regarded as some of these new national heroes as they embodied the characteristics that the nation needed to move forward: grit, determination, and a willing desire to succeed. The following work will make a connection between the cartes-de-visite and the first baseball cards by looking into the production process of collectible cards, how fame played a role in constructing ideologies, and how motivations for collecting stayed consistent and evolved at the same time.